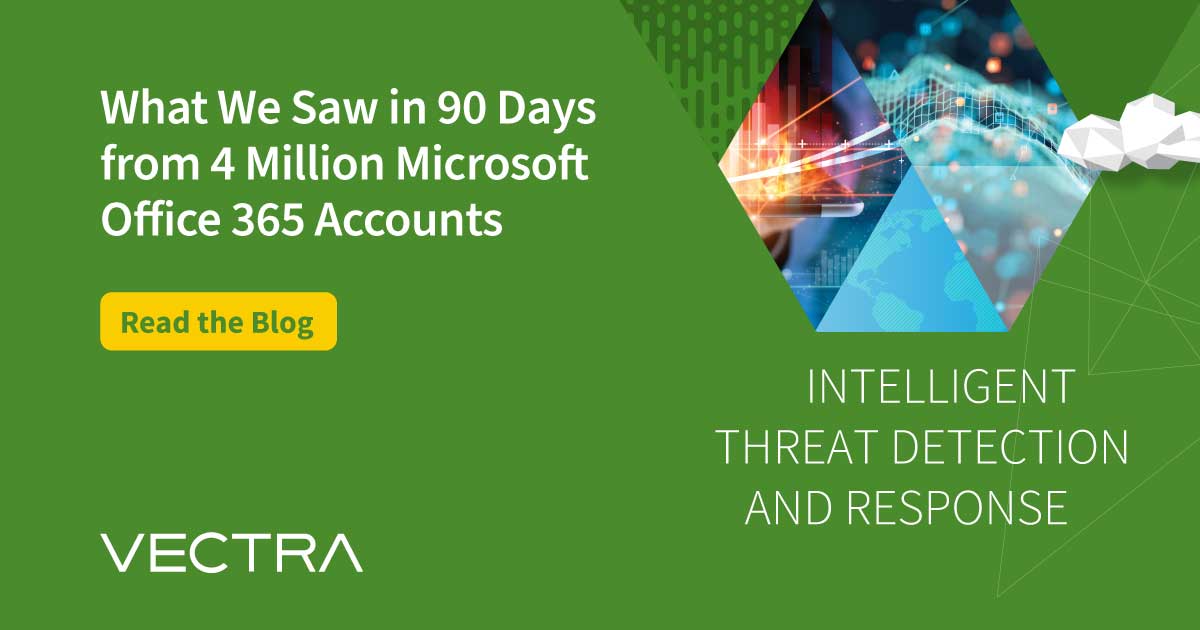 What We Saw in 90 days from 4 Million

What We Saw in 90 days from 4 Million

The new report draws on data observed in over 4 million participating accounts from June-August 2020. During this time, Vectra discovered extensive amounts of lateral movement within Office 365 environments, and we have quantified exponential growth in the threat surface that the cloud presents. Check out the executive summary to learn about high-level takeaways and read the full report for an in-depth analysis.

Email and user accounts are frequently used cyberattackers to gain entry into a network. Vectra research highlights that attackers who gain access use tools that are built into an organization’s cloud environments, such as Microsoft Power Automate and eDiscovery, for lateral movement.

With remote work projected to remain high, we expect this trend to continue in the months to come, as attackers continue to exploit human behavior and use the legitimate tools provided by the cloud to establish a foothold and remain undetected within a target organization.

This report contains analysis findings from Cognito Detect for Office 365 deployments and highlights how attackers use native Office 365 services to enable attacks.

Highlights from the report include:

In addition, the report assesses the top ten most common suspicious behaviors in Office 365 over the designated three-month period. An analysis of these findings emphasizes the need to swiftly identify user data misuse and recognize the value of understanding how entities utilize privileges within SaaS applications like Office 365 and beyond.

The Vectra 2020 Spotlight Report on Office 365 demonstrates the value of NDR when it comes to discovering attacks and enabling security teams to halt any damaging principles that have been installed because of lateral movement.

Get the entire report or to learn more, please contact us or schedule a demo.